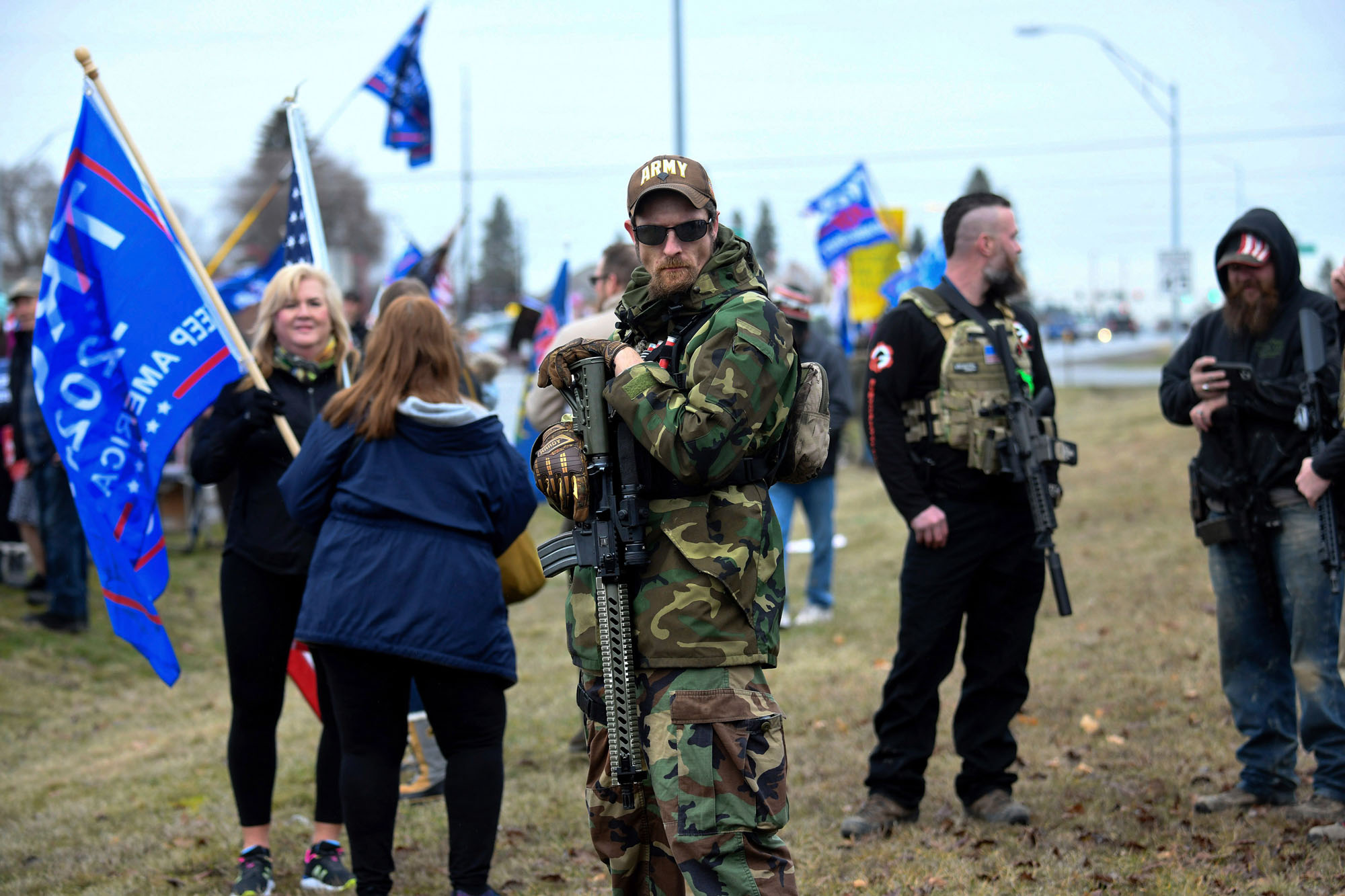 Nevertheless, Bundy dismissed McGeachin’s governor-for-a-day anti-mandate orders as “a political gimmick. The only one they benefit is her.” What would he have done in her place? “I would have done what I did do, rally the people. I would have used the office of the lieutenant governor to unite the legislature to end the [governor’s] emergency order.” As governor, he added, he would focus on downsizing the executive agencies and “restoring power back to the legislature,” where it belongs. But without appearing to see a contradiction, he said he would do so by executive fiat: “I think I could spend four years doing that and not have to deal with the legislature at all.”

In Idaho as elsewhere, Republicans tend to extol “local control” rather than high-handed state and federal directives. But that principle tends to hold only as long as local governments do what conservatives want. Boise, for example, elected its city councilmembers at large, which reinforced its Democratic-leaning majority. So in 2020 Republican legislators passed a law ordering all cities with more than 100,000 residents — which then meant only Boise — to hold district elections, in hopes of capturing some seats. This may have unintended consequences: Two Republican-dominated cities in the Treasure Valley, Meridian and Nampa, have since passed the 100,000 threshold.

Bundy, however, leapfrogs over this contradiction. When I asked him if local control meant school boards and cities should be free to adopt Covid restrictions, he responded in classic libertarian fashion: “The primary local control is the individual, over his own life and body. … There’s no role of a city to come in and say, you can’t come out of your homes unless you wear a mask.”

Still, there’s something inconsistent about his “Keep Idaho Idaho” slogan. He proposes to restore the original Idaho, to rescue it from the likes of third-generation Idahoan rancher Brad Little. But Bundy himself only moved to Idaho six-and-a-half years ago; he grew up on his father’s ranch in Nevada, then lived in Phoenix. “The city had grown up around us” there, he explained. “I just didn’t want to raise my children in the city.” He and his wife visited state after state seeking a new home that, as he put it, still “believes in freedom.” But, he laments, “the whole West” is changing. “I grew up in Nevada. I never thought it would be predominant Democrat.” Even “Utah has its struggle right now. It’s converting over. In Salt Lake there’s a gay mayor. Which is fine, but …”

When the Bundys reached Emmett, they knew “it was the place we needed to be.” Idaho “is a beautiful land, but it’s also a beautiful idea. … Idaho is basically what the United States was.”

No one seems to expect him to win the primary; according to one political operative, an unreleased Republican poll showed him with single-digit support, McGeachin in the low 20s (pre-Trump endorsement) and Little above 60 percent. Bundy’s brother Ryan, running as an independent for governor of Nevada in 2018, won just 2 percent of that vote.

Even if Bundy were somehow nominated, he might not get help from the party. “We’ve got to unite around whoever wins the nomination,” Luna told me. Even if it’s Bundy? Luna’s expression darkened. “He’s not a Republican.”

“He’s right, I’m not the Republican they are, that is for danged sure,” Bundy responded. “I never will be. I’m going to give the people of Idaho a decision … are you Republican or are you conservative? ’Cause they’re not the same thing, especially in Idaho right now.”

Newcomer that he is, Bundy represents a demographic trend that is transforming politics and life in the Gem State. Call it “right flight.” From the 1950s through the 1980s, California was what would now be called a purple state; it elected Republican governors half the time and voted R in nearly every presidential race. Since then, California has turned deep blue; Republicans’ loss there has been red Idaho’s gain. Fueled by migration from California and, to a lesser extent, Washington and Oregon, Idaho’s population has soared since 2015, rising faster than any other state’s.

This growth has been concentrated in Boise and the sprawling, conservative suburbs and exurbs west of it — places such as Star, population 11,000, roughly twice what it was 10 years ago, and Meridian, the state’s second-largest city, which grew 1,157 percent, from fewer than 10,000 to nearly 120,000 residents, between 1990 and 2020. Population has also surged in the far northern Panhandle, which stretches up to the Canadian border. In the heyday of unionized mining and timber industries, the north was the state’s most Democratic region. Now it’s an incubator of armed militias and fiercely ideological local politics and the center of the decade-old Redoubt Movement, which promotes the Inland Northwest as a conservative Christian refuge.

Republican migrants to Idaho outnumber Democrats about two-to-one, according to a statewide annual survey of public attitudes conducted at Boise State University. Rather than importing the liberal politics of the coastal cities they’ve left, many bring smoldering resentment of government regulation and “socialism.” “They want to make sure people here know how evil liberals are,” says Alicia Abbott, a political independent in Sandpoint, the largest town in far-northern Bonner County. She’s doing voter outreach for 97 Percent, an effort to counter the Three Percenters’ armed extremism.

Those who fear and those who cheer the effects of right flight agree on one point: The newcomers are pushing Idaho politics farther to the right. Like Bundy, they bring a convert’s zeal for the hallowed rugged individualism of their new home. “New to Idaho, true to Idaho,” proclaims the influential Idaho Freedom Foundation, which vets legislation and legislators for their conservative correctness. “Are you a refugee from California, or some other liberal playground? Did you move to Idaho to escape the craziness?” its website says. “Welcome to Idaho.”

A thriving local “preparedness real estate” industry is cashing in on right flight. One broker, Todd Savage of the “PATRIOTS ONLY real estate firm” Black Rifle Real Estate and a self-proclaimed “conservative libertarian” refugee from San Francisco, had to revise a listing that read, “This property is for sale to Liberty / Constitutional Buyers ONLY” because the Multiple Listing Service thought it suggested bias against immigrants. No big deal, Savage told me: “Business is fantastic! This whole pandemic thing has really fueled land ownership in rural areas. A lot of my clients are in police, fire, and medical fields. They are coming here in droves. They don’t care about real estate prices. They have money to burn.”

Luna likewise speaks of sending out the “political welcome wagon” to these new Idahoans, to make sure they don’t get the wrong idea about Republicans: “We want to make sure the first time they hear about the Idaho Republican Party, it’s from one of our volunteers, not on TV or in the newspapers.”

The question is, which Republican Party? The power centers in Boise and the Panhandle are not moving in step. The rift opened publicly in July when the Kootenai County Republican Central Committee unanimously passed an effusive resolution endorsing the John Birch Society and urged the state party to adopt it too. (It refused.) The Kootenai resolution also urged those “who do not support our party platform to follow the example of Bill Brooks, and voluntarily disaffiliate from the Idaho Republican Party.” Brooks, a Kootenai County commissioner, quit the party to protest its cozying up to the Birchers, though he still considers himself a staunch conservative. He sees it as symptomatic of a broader shift: “We came here 20 years ago because it was the closest thing we could find to Norman Rockwell,” he told me. “Now people come looking for George Lincoln Rockwell” — the founder of the American Nazi Party.

The newcomers may denounce the cities they’ve left, but they bring a combative, impatient post-urban edge to once-mellow Idaho, an impatience that shows in politics as in the increasingly congested traffic in Idaho’s fast-growing cities.

Chris Fillios, who serves with Brooks on the Kootenai County Commission, feels the heat. Unlike Brooks, he’s stayed in the Republican Party, even though he says he’s “been called communist, Marxist, socialist.” It’s not his politics that have changed, suggests Fillios, who’s lived in Idaho for 21 years and spoke at the first local Tea Party rally. It’s the party. “It’s a psychological mass movement. People are coming here for ‘freedom,’ thinking, ‘I don’t have to mask, I don’t have to be nice.’

“Most people don’t understand that we control only the county departments’ budgets,” he continued. “They think we’re legislators. They want to know where we stand on gun rights and abortion. They want us to reflect their values.”

Fillios succinctly summed up his party’s paradoxical predicament: “We’ve become so politicized with this single-party dominance.”