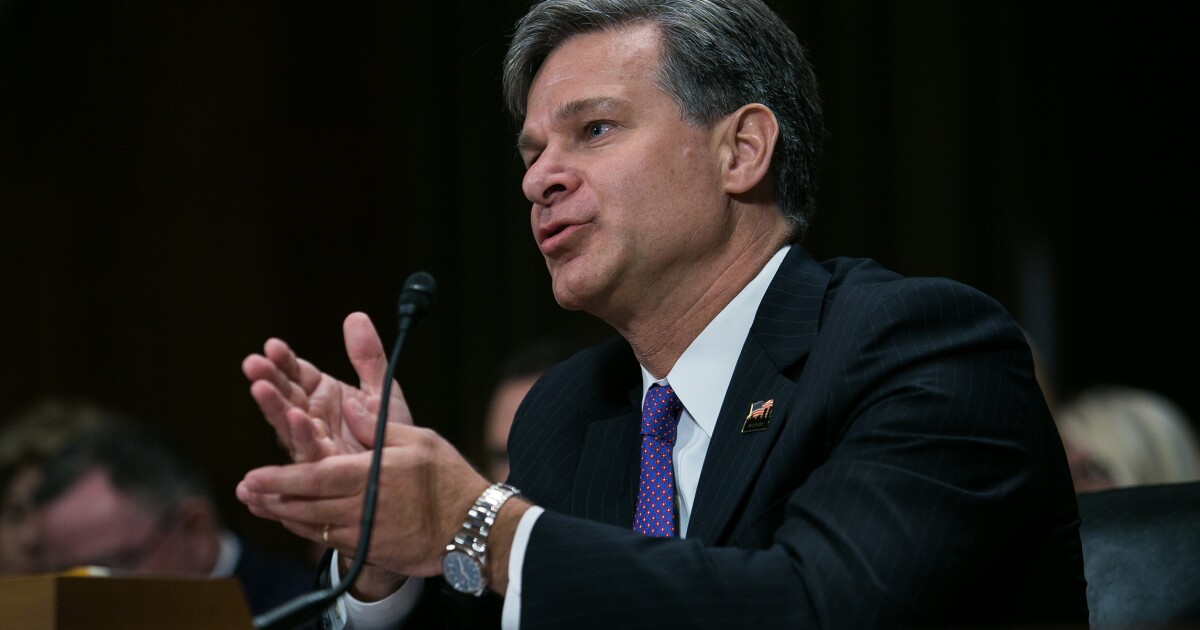 The Associated Press reported last week that Justice Department watchdog reports, federal lawsuits, and witness interviews had “identified at least six sexual misconduct allegations involving senior FBI officials over the past five years,” including two claims brought last week “by women who say they were sexually assaulted by ranking agents.” The outlet said, “An assistant FBI director retired after he was accused of drunkenly groping a female subordinate in a stairwell” and “another senior FBI official left after he was found to have sexually harassed eight employees,” while “yet another high-ranking FBI agent retired after he was accused of blackmailing a young employee into sexual encounters.”

This prompted a response from Wray in a staffwide email last week, first reported by the Associated Press on Tuesday and obtained in full by the Washington Examiner.

“I often talk about our mandate to do the right thing in the right way, every time. That applies not just to the work we do for the people we serve, but to how we treat each other in the FBI family. The FBI must be a model workplace and we must maintain the highest standards. Unfortunately, there are some that haven’t always lived up to those standards,” Wray wrote, adding, “we expect our employees — regardless of rank or title — to foster a workplace that’s respectful, professional, and free from offensive, inappropriate, or harassing behavior.”

The FBI chief said he and his leadership team “remain committed to ensuring allegations of sexual misconduct and sexual harassment are thoroughly reviewed, that full investigations are initiated where appropriate, and that we take swift and appropriate actions” and that “we won’t hesitate to impose severe sanctions where misconduct is substantiated.” He promised that “we’ll ensure that employees are able to work in a safe environment even where a matter is under adjudication” and “victims and witnesses won’t be marginalized, ignored, or retaliated against for bringing allegations against any FBI leader or colleague” because “sexual harassment and sexual misconduct do lasting damage, primarily to victims but also to the entire FBI family.”

The Associated Press said, “Each of the accused FBI officials” in its reporting “appears to have avoided discipline,” and “several were quietly transferred or retired, keeping their full pensions and benefits even when probes substantiated the sexual misconduct claims against them.” The report noted that “federal law enforcement officials are afforded anonymity even after the disciplinary process runs its course, allowing them to land on their feet in the private sector or even remain in law enforcement” despite the claims against them.

“The FBI, in line with DOJ policy, maintains a zero tolerance policy toward sexual harassment and is committed to fostering a safe work environment where all of our employees are valued, protected and respected. When allegations of misconduct are presented, the FBI rapidly takes immediate and appropriate action through internal affairs and disciplinary processes,” the FBI said in a lengthy statement to the Washington Examiner on Wednesday. “In matters involving claims against supervisors, the FBI has immediately removed accused individuals from their supervisory position while the case is being investigated and adjudicated. All reported allegations of employee misconduct are reviewed by the FBI Inspection Division and the Department of Justice Office of the Inspector General; in the most severe cases, criminal charges can be pursued in coordination with the appropriate US Attorney’s Office. The results of employee misconduct investigations are provided to the FBI Office of Professional Responsibility for the disciplinary adjudication process.”

The story came amid speculation about Wray's future at the bureau and whether President Trump might fire him. NBC News reported that “the White House counsel’s office has warned him not to do so because it could put him in potential legal jeopardy” by citing “a senior administration official” and “a U.S. official familiar with the discussion.” Bloomberg separately reported that Trump's aides “advised him not to fire” Wray after the election “because an acting director — or President-elect Joe Biden’s replacement — might be even more adversarial to the president and his agenda.”

The media investigation adds to allegations of wrongdoing against some at the FBI, following a high-profile May 2019 lawsuit by 16 female FBI employees, some named and some anonymous, who alleged they had been subjected to unequal treatment during their time at the FBI academy in Quantico, Virginia. The FBI told the Washington Examiner in June 2019 that “while we are unable to comment on litigation, the FBI is committed to fostering a work environment where all of our employees are valued and respected.”

The women’s updated complaint, joined by a 17th plaintiff, was filed in March.

“Plaintiffs are current and former female employees of the Federal Bureau of Investigation who suffered sex-based discrimination when they were enrolled in the FBI Academy’s Basic Field Training Course … to become Agents and Intelligence Analysts,” the lawsuit alleged. “As New Agent Trainees and New Intelligence Analyst Trainees, Plaintiffs experienced discrimination throughout their time in Basic Training, through the FBI’s policy of issuing disciplinary citations, called suitability notations, based on subjective criteria.”

The Justice Department, defending the bureau in court, pushed back in April.

“Plaintiffs’ attempt to litigate certain pattern-or-practice disparate treatment and disparate impact claims as class claims … suffers from a number of legal deficiencies. First and foremost, a review of the factual allegations underpinning the putative class claims reveals the central flaw … that Plaintiffs’ loose collection of allegations challenges not a uniform policy or practice, but instead highlights a myriad of different circumstances,” DOJ lawyers said, adding, “a number of the individuals who seek to participate in this action as named Plaintiffs either failed to timely contact the agency with their allegations of discrimination, or failed to file their discrimination claims in the prescribed time after being provided with a final administrative decision by the agency.”